I believe I did my first streaming gig 20 years ago, says Ari Hiekkataipale, the latest addition to Unigrafia’s team of specialists. He is excited as he is now able to put his solid knowledge in this field to good use. He also has the opportunity to develop the team’s approaches and methods. 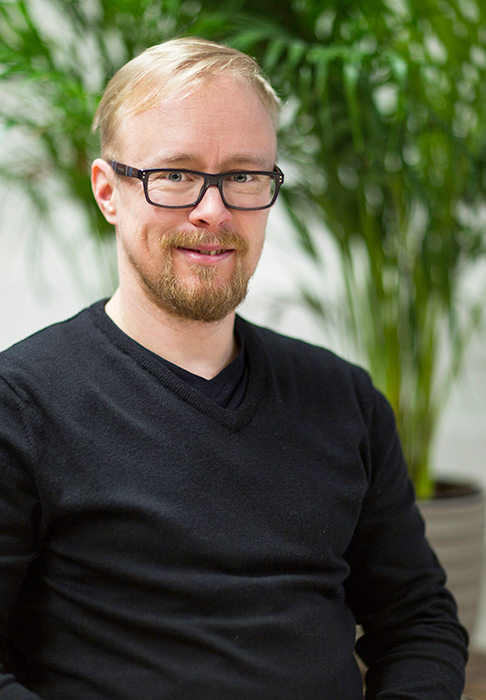 Hiekkataipale graduated in the beginning of the 2000s from Kymenlaakso University of Applied Sciences having studied multimedia and video production, photography, media product design and media technology. ”I found employment in my own field of expertise immediately and I’ve been working pretty much nonstop ever since. After seven years in event technology, I left Bright Finland to join Unigrafia.”

Hiekkataipale was convinced by Unigrafia’s work methods and approaches already during the job interviews. The processes seemed to be in order and the work atmosphere encouraging. He commends especially the structured, meticulous project management and the fact that everyone at Unigrafia has the opportunity to concentrate on their own strengths and in ways to develop them. Hiekkataipale is particularly happy about being able to delve into video production and working with technology while spending less time moving equipment and arranging events.

Everyone in the team has their own area of expertise according to their competencies. There is a person who spends most of their time editing while another photographs and processes the pictures. “Streaming and making sure the process runs smoothly is my area. We are trying to reduce unnecessary steps in order to make selling the service even easier. I really enjoy participating in a development project like this!”, Hiekkataipale says happily.

He has been working also in international video productions. Some of the most memorable ones have been yearly trips abroad arranging big, extravagant events. Those video conferences and streams reached wide remote audiences. Even though video arrangements for large projects and marketing events have their appeal, it’s working with data and scientific facts that is most meaningful to him. ”Compared to commercial entities, I find the university as a production environment very different. Here video is a means of communication and its most important task is to distribute information and content provided by eminent specialists in their field. The greater the value of the content is to the viewer, the more enjoyable it is to work with the video production”, admits Hiekkataipale. ”I am motivated by the fact that this work has a deeper meaning than just keeping a company running.”

Hiekkataipale – with one completed video production in this new role – is already familiar with Unigrafia’s working culture. January was spent with the planning and preparations for a streaming of a seminar and later with post-production. The way things are done were a pleasant surprise. “In my previous job there were tasks that somehow made their way in my area of responsibilities resulting in me thinking about them during my free time. Now I have a clear role. I also enjoy the fact that apart from an occasional evening event, we don’t work at night. Your day ends promptly.” Even though the working environment and the practices are new, Hiekkataipale hasn’t had time to be nervous working in a new company. ”When the employer seems to have everything under control and everyone has a clear picture of what everyone is doing, all you need to do is do well in your own area of competence. You thrive at work and get to concentrate on the task at hand”, states Hiekkataipale pleased.

The next project awaits. It is the streaming of a seminar for the Natural Resources Institute Finland including the planning and preparations. Before that Ari Hiekkataipale can relax with his family, do sports and woodwork. ”In my spare time I do things where you see your handiwork immediately. That is, probably, one reason why back in the day I got into filming and photography. You don’t necessarily realise it but both woodwork and videography are about craftsmanship and creativity. It’s just a different medium.”

Quite the Renaissance man we got. Welcome to Unigrafia, Ari!